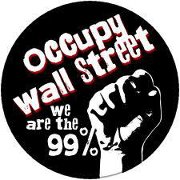 In my secret heart, where I wander in the dark of night, I am a warrior woman. I am strong, fearless, proud.

In my deepest wishful self, I stand straight and tall with those who demand justice. My fist is raised, my eyes are bright.  I am one with the marching, chanting, drumming youth who protest against the corruption of our plutocratic government.   In my fantasy version of myself, I am the 99% and I am willing to Occupy Wall Street.

In the real world, though, things are just a wee bit different.

Out here, in the waking reality of actual life, I am a big old wussy chicken heart.  It turns out that it’s incredibly hard to Occupy Wall Street when you’re too scared to go to New York.

My kids are planning to (once again) take up the cause of inequality and economic injustice. They are heading back to Wall Street on Sept. 15-17 to mark the one year anniversary of the Occupy Movement.  Very cool, right?  They will rally and march and make some noise.

When I first heard about their plans, and realized that my school is closed on Monday the 17th for Rosh Hashanah, I thought that I would go and join them.

I told them that I would drive the 4 hours to New York, and would march with them and hold a sign and stay overnight at a friend’s place.  I pictured us all with our arms linked and me looking courageous and righteous as I added my voice to that of the crowd.  So awesome to see myself as such a truly cool fighter for what is right and good!   The kids were happy to know that I was going with them, and I was happy knowing that we would create this special memory.

But….later that night……I woke up at my usual time (3:15 AM, on the damn dot) and the vision looked a little different.  I lay awake for well over an hour, picture us all marching along Wall Street. But this time, in addition to my warrior self and my heroic children, I also saw the riot police who will inevitably be there, facing the crowd.  This time, I envisioned the press of bodies all around me, the noise of the crowd and the bullhorns and the traffic and the music.

This time, I saw myself as I would really, truly be in such a situation: trembling, hesitating, trying to pull the boys away from the pepper spray. Probably in tears, and probably nauseous.  Instead of warrior woman me, I saw scared-to-death me.

It wasn’t pretty.   I didn’t know what to do!   I spent most of that night trying to decide whether or not I should go and Occupy.

On the one hand, I really want to live up to the ideal that my children have set.  I truly do believe that it is past time for us to rise up and to protest the corrupt and self-serving minority who now controls every part of our government.  I want to be Warrior Mother Spirit and I want to be brave.

A little less than a year ago, my kids became Warriors and Occupiers, and as my daughter wrote in her most recent blog post, Damn You, Google, the experience changed their lives forever.  I want to be that powerful!!

But as the dark of night turned slowly to gray, I realized that I might not actually have the kind of courage that it takes to stand up to the power of the New York City Police.  I realized that there are many kinds of warriors, and some may choose to fight with the pen, and not the march.

I have had to face the truth; I am just not really warrior material.

So, on the weekend of September 15th, I will send my children off to fight the good fight.  I will help with financial support, moral support, emotional support. I will write what I can in honor of the cause, and I will worry with all the power of a Warrior Mamma Bear.

But I won’t actually be occupying any place in particular.