As I sit here this evening, writing this post, I feel the breath of history on my neck.

Tonight I realize, maybe for the very first time, how easy it is, and how arbitrary, to become a part of “history”.

My day began in the cold clear air along the Concord River, overlooking the famous North Bridge. We had decided not to try to brave the throngs at the annual reenactment of the Battle of Lexington Green, deciding that perhaps it wasn’t the best decision to get up at 3Am and drive for an hour while half asleep.

Instead, we met some friends and went to the North Bridge, site of the first true battle of the American Revolution. And we watched the actors and listened to the description of what happened on that historic day. As we watched, we talked with our friends about how these huge historic events, events that changed the world, hinged on a second, a moment, the decision of one scared young man. We talked about how strange and surreal it must have been for the families who lived on the hillside above the bridge as they watched the British soldiers marching toward them. As they watched the shots that started the war.

The entire world was changed by those events, but they were carried out by average people, just living their average lives.

This morning I thought about the farmers and their wives and their children, taking part in history, but not thinking about that in the moment. They were thinking, I’m sure, “This can’t be happening to me!”

They woke up on April 19th, 1775, made breakfast and milked their cows.  They must have gone through their usual routines before they found themselves confronted by those British troops. They must have looked at each other, and they must have thought, “This just cannot be real.”

We watched the commemoration of those events. We remembered the people who lived through them. Then we went out to breakfast, we smiled at the beautiful children, and we watched the parade.

And we came home to find the news of the horrific bombings at the Boston Marathon.  The Marathon that we have watched so many times over all these years. The one that was run by some of our friends, and attended by a lot more of them.

We jumped onto Facebook, and Twitter and onto our phones. Through texting and social media, we learned that one of our friends crossed the finish line 20 minutes before the blast.  Another friend was watching right at the finish line.   If he hadn’t gone to Fenway Park yesterday, he would have been seated in the grandstand at the finish line, right in the line of the explosions.

“Way too close for me,” he texted.  As we heard from our friends, and their families, the thought that kept coming up was, “This can’t be happening to me.”

Life is short, and precious and very, very fragile.  We can never waste a minute of it, or take any of it for granted. 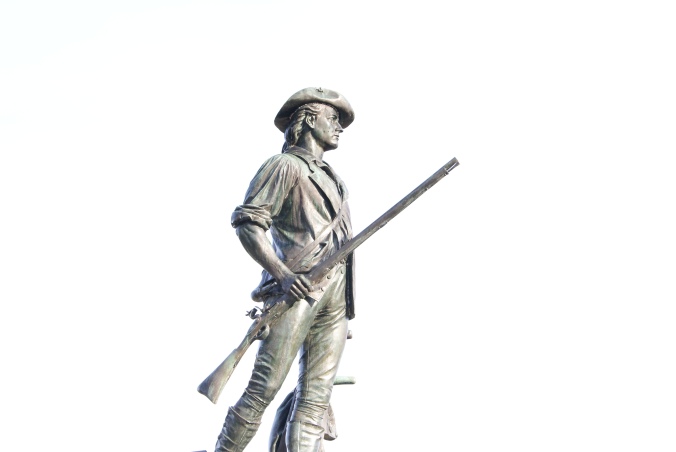 “By the rude bridge that arched the flood,
their flag to April’s breeze unfurled.
There the embattled farmers stood
And fired the shot heard round the world.”

17 thoughts on “History as life”