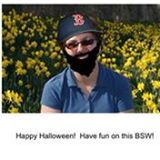 Some days you are just running on empty.  Done. Spent. All hollowed out.

Some days you just have nothing left.  Nix. Nada. Nothin’

I blame Big Papi and those bearded bad boys of Boston. Way too many late nights around Beantown this month. Way too many.  Last night I stayed up for every last pitch, every beard pull, every champagne shower.

But you know what I’m gonna say, right?  This morning was not. So. Good.

I was in a deep, deep sleep when I began to be aware of distant bells.  Lyrical and sweet, they seemed to be calling me to some lovely place where I could rest.  I was enjoying them, right up until the moment when I realized that they were coming from my iPod alarm, and that it was 5:30 AM.

I hauled myself out of bed and into the shower, then headed for the espresso machine. Twenty minutes later, I found myself on the front steps, in the pitch black morning, with my work bag and purse on one arm and a bag of extra clothes in the other.  My witch hat was balanced precariously on my head, and my cape was dragging. A coffee cup wobbled in one hand.

“Grrrooooof”.  Something BIG whuffed in the woods right next to my car.

As I tried to tell myself that it was just an owl, about a hundred branches came crashing down, and whatever it was out there gave another big “grrroooof”.   I squeaked like a terrified mouse and frantically shoved everything into the back seat. My heart was going about a billion miles an hour.  In 4 seconds flat I had vaulted into the car and hit the lock button.

As I sat there gasping for breath, and hysterically trying to peer through the foggy darkness, one hopeful thought burbled to the surface.  “Well, at least I’m awake now!”

I drove to work with my knees shaking, and got ready to start a day of Halloween festivities. With 24 fifth graders.  With a head ache.  On 4 hours of sleep. Woohoo.

I gobbled down some ibuprofin, took my pulse, tried to put the Groofer out of my mind, and quickly threw together a big black beard to go with my witch costume.  I organized my desk, turned on the computer and suddenly remembered that I had a morning parent conference. With a Mom I had never met.  I looked up just as she entered the classroom.  “Hi!”, I chirped, trying to recover my equilibrium.  “Come on in!”

Ever cool in the face of disaster, I swept my cape gracefully around my shoulders and pulled out the student’s folder.  “Have a seat!”, I offered in my best hostess voice, which for some odd reason sounded muffled and sort of fuzzy. Realizing that the young mother in front of my was staring at my chin, and realizing at the same moment that beard fuzz was flying up my nose, I hastily pulled off the beard, and the conference began.

Considering my costume and the 52 sneezes that exploded out of me, I think the conference went pretty well.  Sort of.  Ish.

Enter the 24 hyper kids. “Did you see the game?!” “I love your beard!”  “When can we eat candy?” “Where are my fangs!?” “Do we have homework?” “Can you guess what I am?”  They were all talking so loud and so fast that I started to miss the Groofer. I briefly considered taking more ibuprofin, but my liver started to melt, so I decided to just go for another cup of coffee instead.

It’s now 8pm.  I’m still in the black skirt and orange sweater, the pointy hat and pumpkin spangled socks. The beard is gone, but the headache persists. Over the past 12 hours I have served cupcakes, pretzels and lemonade, danced to “Rock Lobster” and the “Monster Mash”, cleaned up feathers and beard fuzz, corralled and lined up the whole crowd five times, had another conference and attended two professional meetings. Then I drove in the rain through rush hour traffic to give out three bags of candy to the kids in my mom’s neighborhood.  All while dressed as a witch. On four hours of sleep. With the fear of the Groofer in my soul.

But every time I start to complain, I remember Big Papi, sweeping Koji into his big arms.  And I have to smile.

I may be spent, and I may be destined to become a Groofer snack, but at least I got to see another Red Sox championship.