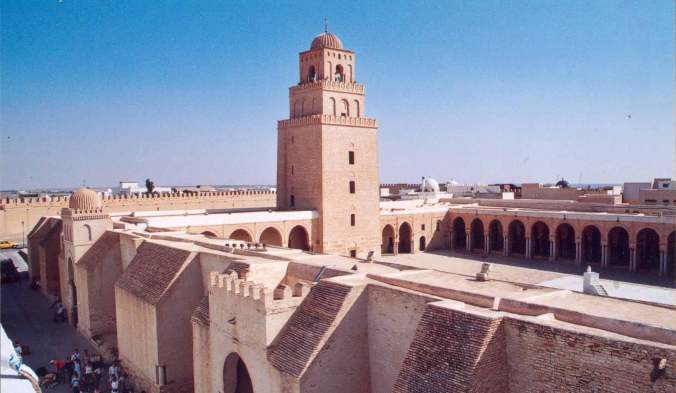 Somewhere in the course of the school year, for some reason that I can no longer recall, I had signed up to join the “American Field Service” program.  I had signed up so that I could become an exchange student and travel somewhere abroad.  I had filled out all the paperwork, signed all the forms, gone through all of the interviews.  I was ready to travel.

To Germany. Or Austria. Or maybe to Wales.  I imagined myself chatting comfortably with English speaking people in beautiful European settings. I imagined just enough quaintness to feel as if I was somewhere “away”.

I never envisioned myself living on the edge of the Sahara dessert, under a red African sky, listening to the call of the muezzin as the sun set into the dusty hills.

But that is just where I found myself in June of 1973.  In the dusty Tunisian  city of Kairouan, surrounded by the 3,500 year old walls of the ancient Medina.  The air smelled of jasmine and heat and spice.  It was so dry that it seemed to crackle, and I felt the sun like a pressured weight on the skin of my neck. I hadn’t even known that the world could feel so foreign. Nothing was familiar.

I had met my Tunisian sisters, young women who were beautiful, graceful, charming and totally foreign to me. They all spoke English, but it was the musical sounds of French and Arabic that were swirling around me as I tried to make sense of my new surroundings.  I knew that they were all trying hard to make me feel welcome, but I remember that on that first afternoon, I was overwhelmed by a feeling of strangeness and confusion.  The whole world seem a bit surreal to me at that moment, filled with dangers and enticements that I had never imagined.  I met my Tunisian mother, a quiet, smiling woman whose kindness did nothing to alleviate my sense of dislocation.  I felt as if I had traveled all the way around the earth, leaving behind my sense of belonging, my sense of the rightness of the physical world around me.  I felt a little bit lost that first afternoon, sitting on the little balcony of the family apartment, desperately trying to understand the conversations of the family.  Desperately trying not to miss my own home, my own familiar family.

Suddenly I heard a man’s voice, calling loudly and somewhat forcefully, “Ou est ma nouvelle fille!?”  (“Where is my new daughter?”) I remember feeling suddenly embarrassed, inadequate. And supremely out of place.

Then he was there, Papa Barrack, smiling broadly and warmly, without even a trace of awkwardness. He wore a white robe and black plastic sandals.  He was not tall, but he was a force. His personality filled the room, embraced us all, pulled me in.  From that moment, I never doubted that I was a member of that wonderful family.  Papa Barrak made it so, and it was so.

Most of all, though, in that wonderful summer of ruins and Carthage and French pop music and skinny dipping in the Mediterranean, most of all, I learned that people are just people. I learned that a Moslem Dad in North Africa and an Italian Catholic Dad in Massachusetts had more in common than anyone could ever have described to me.  I learned that Dads of teenaged girls are proud and loving and protective and annoying and wonderful.  I learned that Mom’s living across the globe from each other faced the very same trials, and the same pleasures.  They shopped, they cooked dinner, they beamed when the kids ate what they had cooked.  They wanted more help around the house, but they understood when it wasn’t forthcoming.  I learned that kids are just kids, that families are just families, complete with love and arguments and annoyances.

From Papa Barrak, I learned that when someone is there to greet you, you can be at home wherever you find yourself. Even at the edge of the dessert, in a land that smells of jasmine and heat and spice.