I think every good teacher has a sort of “schtick”, you know? A little joke or style or habit that the kids identify as special to that particular teacher.

Some teachers speak in interesting languages, or have everyone identify classical music, or bring in pictures of their babies.

I joke about my advancing age.

I know, its pitiful.  But I have colleagues who were born after I started teaching. What can I say?  I have shoes that are older than some of the people I work with.

I often put this picture up on the Smartboard with my morning message. I pretend its me. 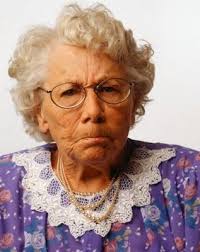 “Hand in that homework or else!”

I think I better stop it.

Last night we went out with some friends to hear music at a local venue. Its a place with great food and a good atmosphere and we really enjoy the company of the couple who invited us. I wasn’t thinking much about the performance, to be honest.

The night started with a group of very, very young musicians who played good solid modern pop/rock. If I closed my eyes, I could have mixed them up with several bands that I hear on the radio.  If I opened my eyes, I felt like I was looking at my students.  The bass player, in particular, looked like he was three years away from his first shave. They were babies.

They were cute.  And super confident. The seemed to be pretty sure that they were the next big thing, and that they had mastered the essence of cool.  They even had the audacity to sing a song called “When I was young”, which got a laugh out of the audience and a bristling response from the lead singer.

They finished up, we chatted for a bit, and then the Legend came on stage. He was slight, a bit stooped, wearing black jeans and a black Tshirt with a black leather vest.  He smiled a little vaguely into the spot light and mumbled some words of welcome.  His band included of a pudgy keyboard player with a grey ponytail that hung from the crown of his freckled, balding head. The guitarist was greying and jowled.  The drummer was the youngster of the group, and he could have been the Grampa of any one of that first band. I lowered my expectations a bit.

Then the music began and time lost all meaning.

Albert Lee, guitarist extraordinaire, leaned into his signature red “Music Man” guitar and played as if it was 1968.  This was his 70th Birthday Tour, but you wouldn’t have known it to hear him. He played with absolutely no awareness of his thinning white hair, the sagging skin of his arms or the aging of his neck. He didn’t acknowledge his age, so it wasn’t there. His voice was strong and pure and sweet as honey.  His picking was flawless and his rhythms crisp and clean.

They played everything from country to rockabilly to early rock and roll.  The Everly Brothers to Emmy Lou Harris. It was FUN!

And I looked around that room, and watched people swaying and clapping and dancing in their chairs.  And I realized that not one of us was thinking about our silver hair, or the bifocals on our noses.  Albert told us that we were 25 again, and we believed him.

Maybe Albert Lee has the secret to aging really well, and maybe I need to learn that lesson.  Ignore time completely, and just keep singing.  Just keep playing and dancing. Hold onto the things you love, and enjoy them every day.

The world doesn’t really belong to the young; it belongs to those who feel young.