“A well regulated Militia, being necessary to the security of a free State, the right of the people to keep and bear Arms, shall not be infringed.”

It seems that the founding fathers wanted us all to be able to bear arms, without having that right infringed upon in any way.  And the Supreme Court has ruled that these words apply to the rights of individuals, and not just to local militias, no matter that the grammar in the actual amendment seems to say otherwise.

I don’t actually agree with either premise. I don’t think that the founding fathers wanted us all armed, and I don’t think that the second amendment to the Constitution was talking about individual rights.  But I have been overruled.  The law of the land, as interpreted by the Nine Black Riders…..I mean “The Supreme Court”… gives me the right, as an individual American citizen, to “bear arms”.

So let’s just think about the meaning of the word “arms” for a bit, OK?

Given that we are now interpreting the words of the Constitution very literally, we must understand that “arms” are not in any way limited to guns.

“The Arms Race” of the fifties and sixties was definitely not about guns.  That was about nukes.

When we send “arms” to the rebels in Syria/Libya/Egypt, we aren’t just sending rifles. We’re sending F-16s and anti-tank weapons, among other things.

According to Wikipedia, “Arms control is a term for restrictions upon the development, production, stockpiling, proliferation and usage of weapons, especially weapons of mass destruction“.

So let’s be clear.

The Supreme Court has said that I, as an individual American citizen, have the absolute right to “bear arms”.

I plan to get myself one of these

and one of these 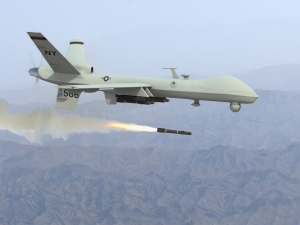 just so I can feel safe in case somebody tries to mess with me or my students.

If you think this seems a bit ridiculous, if you tell yourself that “obviously” that isn’t what the second amendment intended, then I will tell you that its just as obvious that the founders didn’t intend to let the average guy on the street walk around with a Bushmaster AR-15 rifle and two handguns — a Glock 10 mm and a Sig Sauer 9 mm. plus 500 rounds of ammunition like the Sandy Hook killer did.

We either have the absolute right to bear all kinds of arms, or we don’t.  We either decide that there are no limits, based on the words in the old documents, or we decide that its time to be reasonable and logical, and take the instruments of mass murder out of the hands of the public.