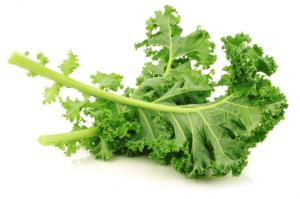 I keep writing about food.

But its been snowing for the past month and there are five feet of frozen disgustingness outside my window.

Of course I’m preoccupied with food.

So today I want to write about one of the great food cons of all time.  Today I want to expose the misleading information being spread around about kale.

“Kale is a superfood!”

Ha.  What they fail to tell you about this superfood is that it tastes like the smell of skunk and is just about as digestible as a pile of brillo pads.

I recently cleaned out the veggie drawer in my fridge.  I pulled out the aging lemons, the shrunken radish and the mystery slime.  What was left?

What the hell is that stuff made of? It had been in there for at least two months.  It was still crisp.

I scooped those old leaves up with everything else, ignoring my “don’t waste it” instinct, and I threw it into the compost bin that I have going in my basement.

Let me take a moment to describe this compost system.  I collect all kinds of fruit and veggie parts, along with coffee grounds, bread, tea bags, napkins, egg shells and paper towels in a small bucket next to the sink. When the bucket is full,  I dump all of it into a big plastic box that is home to a pile of “worm castings” and roughly 2,000 wriggly little red worms.  These guys are voracious and indescriminate.  They eat anything they find, and transform it into compost. I once dropped a face cloth in there by accident and two days later it was in shreds. They will turn a banana peel into rich, dark soil in about 20 days.  Orange peels? Maybe four days.

So I dumped in the lemons, the radish, the mystery slime and the three leaves of kale.  I dug in with my trowel, turning the compost and making sure that everything was buried.  The next day, I turned it again, and up popped the kale, untouched by a single worm nibble.  I turned the compost again the next day, and the next.  Kale leaves kept coming to the surface, looking as green and crisp as the day I bought them.

“What the hell?”, I had to ask myself, “Have a really been eating this stuff?”  I poked the leaves with the tip of trowel, tearing them into smaller bits.  I thought maybe smaller pieces would be less intimidating for the worms.

It is now one full week since I dumped everything into the compost.  I’ve added another small bucketful since then.  I turned the pile today, and saw half of an eggshell that I threw in yesterday, and part of an apple core.

I looked at the worms.  One of them seemed to approaching a kale leaf, so I grabbed a magnifier and looked closer.  I saw a tiny worm mouth open and take a teensy nibble of kale leaf.  Then I watched in amazement as the minute little guy pulled his head back and made a perfect miniscule grimace of distaste.  He turned around, slid of the kale and buried himself in a pile of potato peels.

Even the worms can’t seem to digest it!

I guess the explains all the gaseousness that came along with those healthy kale shakes.

13 thoughts on “Even the worms hate it.”