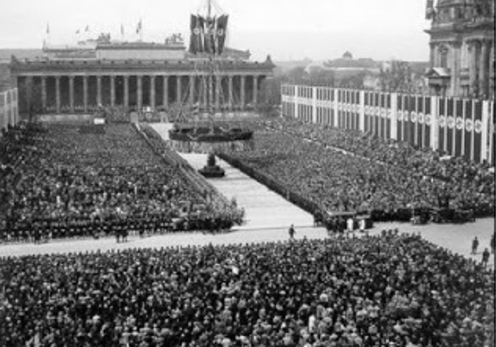 I read about Adolf Hitler, and his rise to power.

I was about 15 or 16 years old.  I learned that the average German didn’t seem to push back as Hitler rose to power.

I couldn’t understand it.  I thought to myself, “If I had been living in Germany in those days, I would have stood up for the Jews.”

When I got older, I read more about the events of WWII.  I read “The Diary of Anna Frank”.  I read the memoirs of Elie Wiezel.  I saw photos from Auschwitz and Dachau and Bergen-Belsen.

I was sure that if I had lived in those horrific times, I would have spoken out loudly and clearly against the actions of my government. I would have denounced Hitler with all my might, I told myself.

And still more years went by.  I went to college and majored in Russian language and Political Science.  I got a job as an interpreter for Jewish Family Services, where I helped to resettle Soviet Jews in the Boston area. I mostly worked as a medical interpreter, taking elderly Russian Jews to doctors’ visits at Beth Israel Hospital.

There I heard first hand accounts of life in the camps.  I saw the numbers tattooed on those old arms.  I listened in breathless horror as one woman told me her story of running through the forest, pregnant and carrying a toddler on her hip.  She was shot in the face, but the bullet did not kill her. She kept running, dragging her sobbing little son through the woods until they both collapsed.  She pointed to the ragged scar on her face.  She introduced me to her now adult son.

“If I had been there,” I told myself, “I would have fought against those damned Nazi’s with every ounce of my strength.”

I remember asking one Russian Jewess about those terrible times. “But how did the Nazi’s get so much power?”, I asked her. “How did they rise without anyone opposing them?”

She smiled, and nodded her head.  I can still see her solemn smile.  “Медленно”, she told me in Russian. “Slowly. Little by little.”   I didn’t understand.

I assumed that I would have known how to fight back against my leaders at a time of extreme xenophobia.  I thought, for some reason, that I would have been able to articulate a reasonable response to government officials who tried to rally the country against a helpless minority.

I was so sure, so very sure, that I would have stood up against the Nazi’s if I had lived in German at the time of their rise to power.

And now here I am, living in the age of anti-Muslim fervor.  On a day when my own Governor wants to stop Muslim refugees from finding safety in my state.

Here I am, living in a time when those who seek the highest office in our country use the same kind of anti-minority, xenophobic, “us vs them” rhetoric that once shaped events in Germany.  When one of the leading candidates for President makes up lies about Arabs and Muslims, blaming an entire community for the fear that so many Americans feel every day.

And I find that I am nearly powerless to speak out.

What can I do?

I have written to my Governor, to my local paper, to the White House.  I post my opinions on Facebook.

I write here, in this tiny, inconsequential blog, in a desperate attempt to make my voice heard.

I abhor the fear mongering that is part of this Presidential Campaign. I hate the lies that are being told by the likes of Donald Trump and Ben Carson.  I am afraid of the direction that my country is taking as we face the unrest and violence that is coming from the Middle East.

I want to believe that I can stand up against this horrific racist rhetoric.

But what can I do?

I am screaming, but I don’t think that anyone care hear me.

21 thoughts on “A History Lesson”