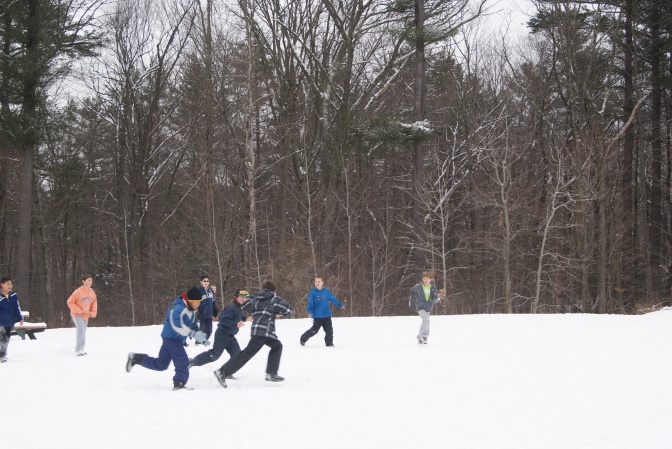 Happy snow day to everyone living in the Northeastern U.S. It’s been pouring down hard all day, and we’re enjoying time by the fire.

Of course, now that I’m retired from teaching, a snow day is a mixed blessing. I get the day all to myself…yay! But I get the day with no beautiful granddaughter…boo.

I was lying in bed this morning, watching the snow falling out my window. I was thinking back on past storms, past snowy memories. Thinking of the times I enjoyed the snow with my own kids and the kids in my classroom.

There is one particular school day memory that still makes me smile.

It had snowed hard the evening before, but the roads were clear by dawn, so school was open. It was the first significant snow of the winter, and everyone was talking about it when they arrived.

I was standing in my classroom, teaching math, I think. The kids were restless. Feet were tapping, pencils were being rolled on desks. They weren’t misbehaving, but their minds were clearly not on multiplying fractions. I tried to pep things up a bit with made up word problems using their names, but it didn’t help.

I caught one little boy sitting with his chin in his hand. His face was aimed at me, and he was sitting quietly in his seat. But his bright blue eyes kept cutting to the window.

I looked outside myself.

The sky was the same china blue as my student’s eyes. The sun was shining down on a scene of perfect, pristine, sparkling snow.

Our playground didn’t have a single footprint on it.

I glanced at the clock. Two hours until recess.

Without saying anything, I suddenly closed my math book and snapped off the Smartboard. The kids sat up straighter in surprise. Every eye was on me.

Were they in trouble? What was going on? Why would a fifth grade teacher suddenly stop teaching in the middle of a math lesson?

“OK, gang.” I said, reaching under my desk for my boots. “Get your coats and snow gear on, quickly. If we move fast, we can be the first ones to hit the playground.”

The sound and the sight of those 24 ten year olds bursting through the back doors and racing across the snow has stayed with me for the past 10 years, as clear as can be.

They were the embodiment of pure joy.

I just stood there in the sun, watching them jump and kick and roll in that perfect snow.

I hope some of them remember that morning. I hope they remember what it felt like to let go and just give in to happiness.

I’m sure they all went on to eventually master fractions.

But I hope they remember that sometimes it’s important to drop the book and just get jump in the perfect snow.

5 thoughts on “Memories of a snowy school day”