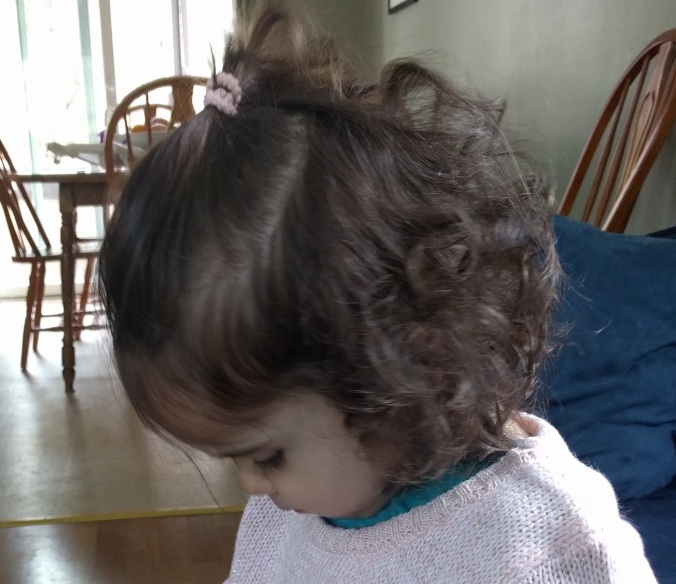 Ah, life with a toddler.

It’s also something better suited to young parents than it is to aging Nonni types. Which isn’t to say that I’m complaining, OK?

Today I picked Ellie up a little later than usual. I knew that her Mommy had gone to work early, and that she’d spent the morning with Dad.

What I didn’t know was that she’d only been awake for a few minutes when I got her. I was struck by the fact that her hair looked like a cross between a bowl of rotini and a bird nest, and that she wasn’t wearing shoes.

At my request, her Dad ran back inside and grabbed her sandals, and off we went. I wanted to grocery shop before we went home, because the weather was forecast to be in the mid 90’s. We needed to get home and fill her little pool before the worst of the heat hit us.

So. I stopped inside the grocery store and brushed out the curls and tangles, placing a little pony tail on one side of her head to keep her eyes visible. Her hair is a miracle of beauty and stubbornness, and I’m obsessed with it.

Then we shopped, and as we did, my tiny girl ate slices of turkey, ham and cheese, pea pods and string cheese. I bought some new toddler cups and a bottle of water, and she sucked down some liquid to counteract her salt.

And home we went, where I raced around my steamy house trying to put away groceries. My tiny girl ate some blueberries and yogurt. Her face and hair showed them both beautifully.

At last, we were ready to head out into the beautiful summery day. First, though, we had to sunscreen from head to toe, spray on safe organic bug spray, put on the sunhat and tighten it under the chin, grab the toys, (no, no, One Eyed Elmo can’t swim), put the dogs inside the fence, and get some water.

I blew up the pool, and filled it with water from the hose. The hose that is attached to the sprinkler. Attached so tight that Nonni almost burst a blood vessel trying to get it off.

Its on there that tightly because Papa really loves his strawberry patch and he wants it watered.

So by the time the tiny blow up pool was filled with ice cold water, Nonni was soaked to the skin from the wonderful, back and forth sprinkler.

For one glorious hour, we splashed, we jumped in the pool, we shivered, we ran around on the grass. Finally it was lunch time, and Nonni pulled out one of her patented grandmother tricks.

“Ellie! Let’s go inside for an ice cream cone!”

Come on. I figured that at 22 pounds, she’d already consumed enough healthy calories for the day. So in we went, and I stripped off her wet clothes, leaving her in her bug sprayed, sunscreened, sweat soaked skin. I put her in her highchair and filled a cone with two big scoops of peanut butter cup ice cream. (Protein. I swear.)

After I had cleaned myself up and done a couple of quick chores, I joined Ellie at the table. I had a leftover cheeseburger in front of me.

“Mmmm!” My baby girl said, reaching out. “mmmm, beef!” So we shared. And her hair, slicked back with oily sunscreen and dead bugs, now got a lovely coating of ketchup.

At last she was full, and I scooped her up and dropped her into a warm, bubble filled tub. She had a nice, thorough shampoo, and lots of lather to make sure no ticks were hiding in any dark places.

We settled into the living room, in front of the fans, with her golden skin so clean and shining, and her glorious curls smooth and completely pristine.

“Ahhhhhh,” Nonni thought, “I do such a good job of taking care of this girl. ”

I checked my email while Ellie watched an episode of “Elmo’s World”. Elmo was learning about potty training, so I felt particularly smart and accomplished as a day care provider.

But if you’ve ever seen Elmo, you’ll know that he has a goofy sidekick named, “Mr. Noodle.” This hapless guy appeared on my TV, and Ellie’s eyes lit up.

And you guessed it.

I did what any self-respecting Nonni would do. I made her a bowl of noodles. Wagon wheels, in fact. I put in some peas and a big blob of butter. And back in the high chair she went, smooth skin, diaper on, clean, clean hair.

Until I went into the kitchen to wash dishes.

And came back two minutes later to see Ellie, eyes closed in apparent ecstasy. Saying, “mmmmmmmm” as she rubbed her two hands through her glorious curly hair. Hands filled with noodles, peas and butter.

She gave herself a pasta and butter shampoo.

I think a squeak of despair may have come out of my mouth. Or maybe a little, tiny, whispered curse.

I picked her up, washed her with a face cloth, and dragged a brush through the excessively buttered hair.

“I’m giving you back to Mommy soon,” I said, as I laid a towel under her head before naptime.

Really. I’m having fun and all, but this is definitely a job for a younger woman.

12 thoughts on “When You’re Two, Everything Is Fun”