I am done. Worn out. Run down. Squeezed dry.

I am just absolutely sick of all the Americans who are determined to pounce on every reason to gripe, point fingers and complain about each other.

A hurricane came roaring into an American city. It blew over homes, businesses, churches, schools, animal shelters, restaurants and used car lots. It poured more water onto one spot than we’ve ever seen.

Human beings are dying out there. They are dying in their flooded houses, huddled on their bureaus on the third floor. Old people are shivering in the cold water. Babies are crying and scared.

This is a true, honest-to-God disaster.

And I can’t help them! I can’t rush in from the safety of my New England home to rescue terrified families. I can’t bring medicine to sick people, or take home drowning puppies, or jump in my kayak to deliver clean water.

It breaks my heart to watch and be unable to help, other than writing a check.

In light of all that, may I please make a request?

For the love of God, Barack Obama was NOT president during Hurricane Katrina. Stop with all that “Where was Obama during Katrina?” crap. Just stop.

This is not Hillary’s fault. It isn’t Obama’s fault, or Debbie Wasserman Schultz’s fault. The DNC didn’t cause this and you can’t pin it on Bill Maher or Rachel Maddow or antifa.

It was a hurricane. It was nature. It happened.

I do not care, not one bit, what kind of shoes Melania wore to Houston. I don’t care that Trump sounded incredibly self-serving at his press conference down there. Hullo. Have you ever heard him NOT sound self-serving? His narcissism is NOT the point today.

Texas needs help, and Congress can provide it. So can we please move on and forget that after Hurricane Sandy a bunch of Texas political hacks refused to vote in favor of a relief package for New Jersey? Now is not the time to play “I can be as big an asshole as you can.” Americans need help. End of story.

Also, I know that some people out there will try to post images that feed a particular racial narrative (the looting black men, the white rescuers, etc). But does it really help any of us to be on hyper alert searching ahead of time for those posts?

There are a million other images out there that show the young black men saving elderly white ladies, and black officers holding onto white children.

All I can say is that I have been more or less glued to the news for the past week. I have heard story after story of plain old regular folks coming out to save others.

Today I was listening to NPR, and I heard an interview with a young man who had come from his safe Texas town to another flooded out community. He came with his boat and his cousin in tow. The young man had one of those thick-as-molasses Texas accents that in normal times makes me think “redneck.”

I’ll be painfully honest, in normal times, I would have immediately pegged him for an ignorant southern hick. I would have assumed he was a big Trump supporter and that he was probably a racist.

All that because of the way he says, “Yes, Sir, I heard they was needin’ boats out bah the freeway.”

But I listened to his words as he was answering the reporter. He said that he’d come down with his boat because he has a license to navigate it. He cousin came because he’d served two tours in Iraq as a medic, and he was able to help anyone with medical concerns.

And with a little laugh this humble young man said, “I figured we was at least kind of qualified to help.”

When the reporter asked him why he would risk his life for complete strangers, he was clearly taken aback. He said, “Well, Sir, if it was your Momma or your Grandaddy in the wattah, wouldn’t you wan’t someone to come ‘n hep?”

So please, dear friends. Give it a damn rest. Stop the finger pointing, the name calling, the anxious and angry posturing. I’m pretty sure that when the water goes down, all the bullshit will start back up and I’ll be more than ready to jump back on the “Trump is insane” bandwagon.

But for now, can we just please do our best to stay positive, and let everyone heal up a bit? 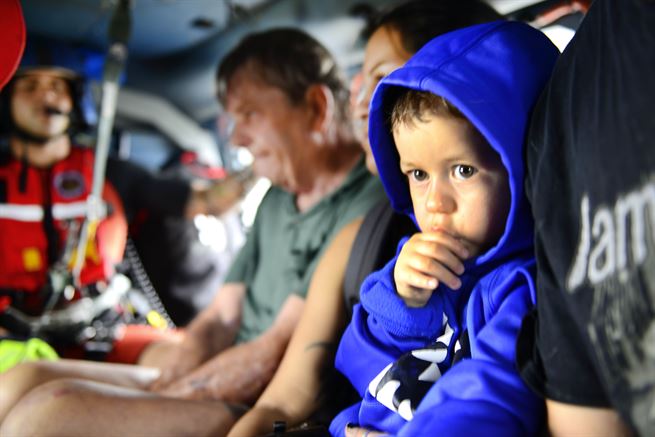 6 thoughts on “All Worn Out”