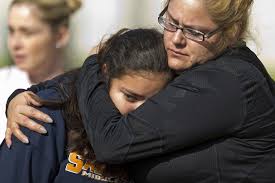 There was another shooting at another school in the United States this past week.

I know. Yawn, yawn. It doesn’t even make the headlines anymore.

Think of the teachers who kiss their children goodbye every morning and grab their travel mugs of coffee as they head to school. Think of the parents, millions of them, who pack lunches for their kids and check homework. Picture them kissing their children and putting them on the big yellow bus.

I used to be a teacher. I went to those terrible, horrifying trainings on how to react to a live shooter in our school. I had to keep my door locked at all times, in the event of a shooter coming in to get us.

I used to stay awake at night picturing how I would react if someone burst into my classroom with a weapon. I imagined using my broom to hit the bad guy in the chest or the throat. I imagined telling my ten year old students to lie flat on the floor as I did this. I thought about kicking the weapon away from the killer and I thought about hitting him with my broom, or my feet, or with a big dictionary.

What kind of country asks its children to practice hiding from guns, rather than keeping the guns out of the schools? What kind of insane society asks its teachers to practice taking out a murderer during a reading lesson?

The other day a little girl took hold of a gun and brought it to her Los Angeles middle school. She shot her classmates.

Let me say that again.

What kind of country would allow her access to a weapon? What kind of sick, twisted, insane society would put this kind of gun into the hand of a sad little girl who doesn’t understand its power?

I am so ashamed to be an American. I am. THIS is why.

We have so completely lost our way, America.

A TWELVE YEAR OLD brought a gun to school and shot up the kids who were bugging her. And nobody in power gives a shit. It didn’t even make the front pages of our national newspapers.

We have lost our way. We are lost. We have abdicated our right to call ourselves merciful, kind or nurturing.

I am sick at heart. And I will forever mourn the adults who let this little girl destroy her own life and the lives of her classmates just so they can tell themselves that they are big old badass gun toting Mericans.

If Canada would have me, I’d be there next week.