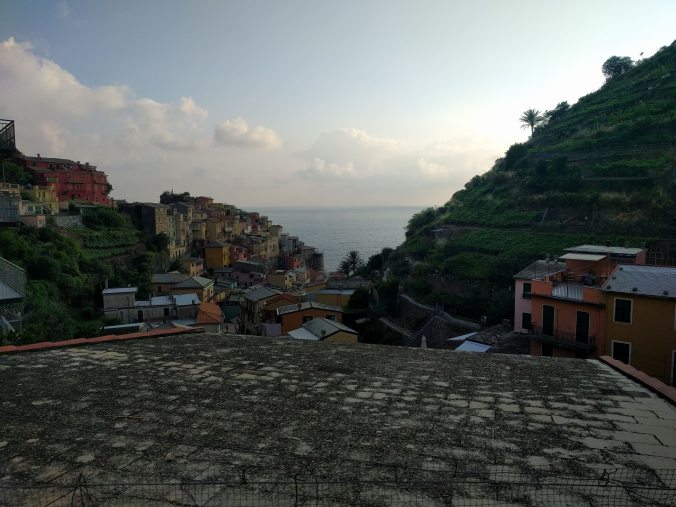 If you had a chance to read “Nonni On a Train,” you’ll know that I found myself in the beautiful town of Riomaggiore without my purse, license, credit or debit cards and minus about 150 Euro.

If you’ve ever met me, you’ll know without my even saying it that I had a full on panic attack standing in the train station.

Many swears were spoken in more than on language on that platform. I think I even made a few of them up.

But while I was having my heart attack, I was lucky enough to be surrounded by calmer heads. My husband the saint never once asked how I could have been stupid enough to forget my purse. My sons assured me that everything could be replaced and that money is only money. My future daughters-in-law came up with several good ideas of how to proceed. All would be well, they all assured me.

My first thought was to find a police officer. So I ran into a little restaurant and asked in my broken Italian, “Where can I find the police?”

The two women who worked there looked at me with pure horror. “Polizie?” one asked. The other put her hand to her mouth. I realized that they were both thinking, “Holy shit, someone got stabbed/raped/beaten and it was right outside our door!”

As quickly as I could, I reassured them. With a mixture of hand gestures (pays to be Italian by birth), broken Italian and simplified English, I explain that I had left my purse “con documenti i carti” on the train. I was a wreck, shaking, sweating in the 90 degree humid air, my heart pounding. The older woman said, “Ah, capito! I help.” and grabbed the phone. She motioned to her friend, a younger waitress and told her to get me some water. They sat me down, poured me a cold glass of water (the best water I have EVER tasted) and got in touch with the police in the town of La Spezia, where the train was headed and where my family and I were staying.

I don’t speak much Italian, especially when I am in the middle of a complete emotional breakdown, but I understood that the local cops told my rescuer to call the train security people. She did just that, talking to them for more than 20 minutes. The younger woman kept an eye on me, saying, “Oh, my God” and “What a mess” or something like that. Every now and then she’d pat my shoulder, squeeze my hand, or pour me more cold water.

Meanwhile, my husband was trying to check on which documents he was carrying and which were with me. My sons had gotten the number on the front of the train and were thinking of ways to quickly get back to La Spezia. The girls were talking to locals and asking for advice while all of them waited for me to reappear.

Finally the woman in the restaurant asked me for my phone number and name, which she passed on the person in train security. She told me “Tomorrow….morning….go to…(pointed to a word on a paper)….” In Italian she said, “Maybe they will have your things.”

I was so overwhelmed! In one of the busiest tourist towns in Italy, right at the dinner hour, she had stopped everything to help a complete stranger who she’d never see again. I was teary eyed as I hugged her and her compassionate friend. “Grazie, grazie mille, grazie!” I made my way out the door to find my family, wiping tears away.

We took the train back to La Spezia, with the kids joyful energy keeping my spirits up. When we got there, we found two train security people. One was a tall (handsome) guy and the other his short, pretty female partner. We told them our story, and they said that they had already heard about it (yay for my heroic woman friend!) They asked if I wanted to “make a report.” I had no idea what that meant, so I asked if they’d do it in my situation.

In true Italian fashion, they shrugged. I got the impression that they figured it was a lost cause. So did I.

When we were about to leave, I pulled out the last of my remaining humor and asked, “Per favore, dovi il vino?” (“Please, where is the wine?”) They laughed, and we said goodnight.

For an hour, Paul was on the phone trying to cancel my credit cards. He managed to do that, but he also inadvertently cancelled his. That meant that we were down to half of our cash and one debit card.

The next morning we planned to take a ferry to the “Gulf of Poets” to enjoy the gorgeous scenery and swim in the Mediterranean. We decided that it was pointless to go the to train security to look for my purse. Who would find a purse full of cash and cards and bother to return it? Even it had been returned, wouldn’t the local police take the cash? I mean, come on, we’ve all heard about the corrupt Italian police. And the cards were no good anymore anyway.

We did our day trip. We came back to La Spezia and had dinner. We went to bed.

The next morning we were heading to Rome. We all decided that we had just enough time to hop back on the train for one last visit to the Cinque Terre.

We boarded the train, and just before it left, the doors opened. In walked two police officers. I saw them come in, and saw the taller one glance at my kids and then lock his eyes on me. He pointed. He strode toward me.

My heartbeat went to about 524. I think I squeaked.

I was sure I was headed for Italian jail.

I squeaked again, then my girl Jessica said, “It’s about your purse!”

“Si!” the tall cop said, and I suddenly recognized him from the other night. The good looking one (Jeez. I am getting old). “You come with me! Now! We have your things!” He grabbed my hand and Paul and I ran off the train with him and his partner.

It turns out that he was watching the security cameras, and he recognized me! Holy amazing.

He took us to the office of the train security officer, a big, jovial guy named Luca who even had the kindness to flirt with me as we were introduced.

I was truly dumbfounded by the whole thing. I hugged the two officers who had taken me off the train with about 50 heartfelt grazies. As I turned to follow Luca, the man asked, “Signora, il vino era buono?” (Was the wine good?)

It turns out that in this scary, supposedly corrupt country, a woman can drop her purse in a tiny train bathroom, have it ignored by countless other riders, and then it can be picked up the train security. Those security people can ignore the 150 Euros in it and bring it to the head guy, who will not only leave every cent inside of it, but spend hours trying to find its owner on the internet and by phone (mine had died when he’d called.) A guy just doing his regular job can see a familiar face on his camera, rush onto the train, and save the whole situation.

19 thoughts on “The Missing Purse”