I love being a grandmother. I mean….jeez, I love it! I get to adore my grandchildren without worrying every minute that I’m ruining their lives. (Yup. I remember being a neurotic Mom.) I get to play, make a nice mess, then have the evening to put things back in order.

Ellie, at the tender age of three, is a bit cautious and very sensitive to feelings and moods. And she’s dramatic.

She also loves to solve problems. She has a certain tenacity that lets her scream in frustration while trying to put things together, then sob in outrage, then pick up the tools and start again.

She works with her tongue in the corner of her mouth, frowning and humming as she tries to figure out which piece goes where. She does NOT quit.

She loves to dress up, she loves to dance ballet. The more glitter, the better, as far as Ellie (“I’m Elsa and Anna right now.”) is concerned. She loves hair ties, and jewelry and plastic princess shoes with high heels.

And she loves blocks, trains, cars, fitting things together and tool kits. She loves to cook, to plant flowers and to defeat the bad guys with her magic.

She is a warrior woman. She is all things that a strong, brave, beautiful, self-confident young female should be. 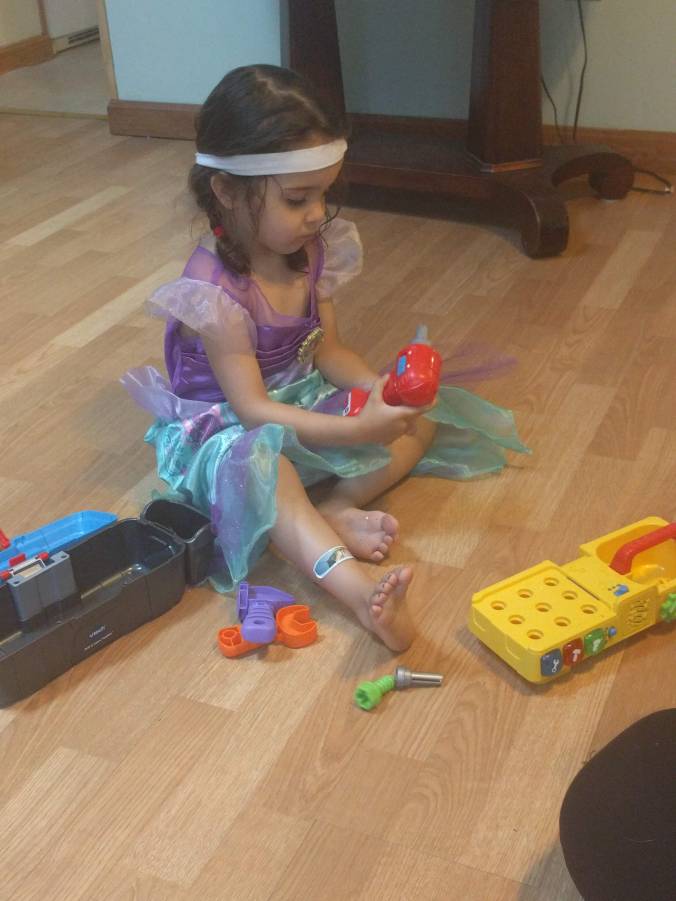 Yes, I am using a drill while dressed as Ariel. Why do you ask?

Hooray for letting kids choose their own way. Hooray for telling young girls that they can be sparkly superheroes who defeat the bad guys with drills and high heels.

Our little Johnny is only a year old. He can walk, climb, throw a ball, drive a car, play the drums and smack his Nonni in the head with a block.

He hurls himself backward into whatever is behind him, whether it’s the couch, a blanket or a pile of bricks. He kicks, he squeals, he eats with both hands.

He seems like the traditional description of “all boy.”

He also looks at his Nonni from across the room. He tucks his little chin, grins and toddles across the room with both arms wide open. When I scoop him up, he rests his cheek against mine and coos, “awwwwww” as he hugs me.

He puts his toys to sleep on the sofa pillows. He feeds them and sings to them and rocks them.

Johnny sings and dances when any music comes on. He asks me to sing when I rock him to sleep, but if he doesn’t like the tune, he sits up in my arms and puts a hand on my mouth. He likes gentle, repetitive songs that have words he can imitate. “Blue bird, blue bird, at my window” is one of his favorites.

When he was here with me the other day, without his big sister or his Mommy, he found a headband of Ellie’s in a drawer. “Ah”, he said, handing it to me. “Ah” . He tilted his head forward, so I’d put the band on his head.

Then he started to dance. There was no music playing, but he knew that on most days, he and Ellie would dance to the music on my computer.

He twirled, he raised his hands, he picked up one foot at a time. He was delighted to be dancing in the sunshine of my living room, all by himself. He was dancing for his own pleasure.

Then his internal ballet music must have stopped, because he bent down to pick up a toy car. 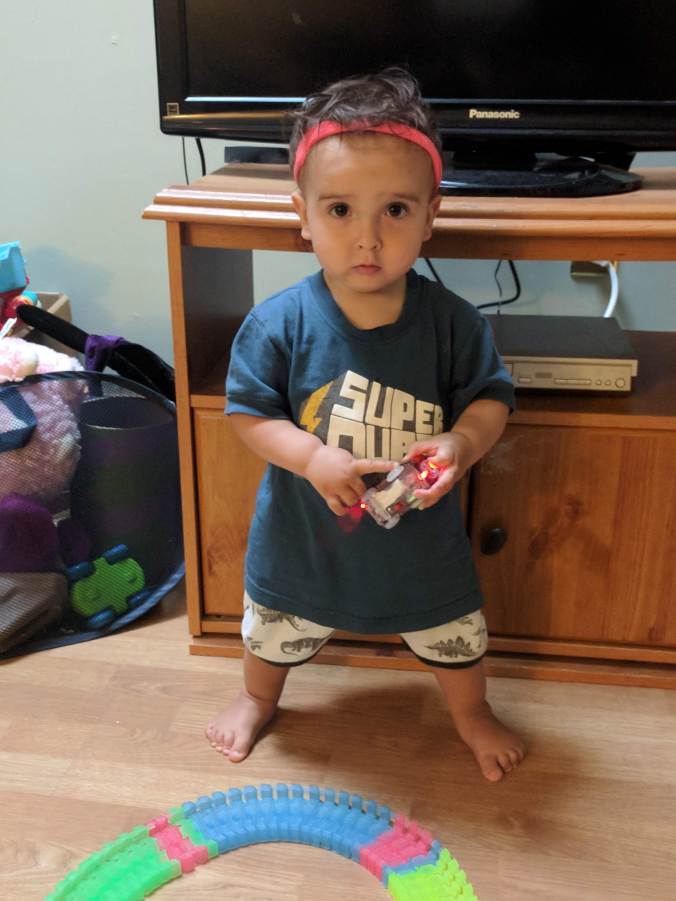 “One pirouette and Vroom!!!”

“Vrrmmmmmm!” he announced, his headband still delightfully in place.

Kudos to the new generation of parents, who let their boys dance around in pink tutus while their girls use the drill. You all give me so much hope for a happy, more balanced future.

4 thoughts on “What Gender Roles?”