I have to admit. I have not always been a big supporter of labor unions. At one point in my life, I served on my local School Committee and was charged with negotiating a new contract with our education union.

I admit it. I was frustrated by the union, even though at the time I was a teacher myself. I thought that sometimes they were more focused on themselves than the kids. It made me angry.

But a couple of years after that experience, I took a class on the Industrial Revolution. We went to a bunch of mills, tenements, factories. We read a lot of first hand accounts of the young men and women who worked in these places. We learned about the originally altruistic intentions of the factory owners.

And we learned what happened when competition began to make it harder and harder for the owners to maintain those rich life styles. We learned about the increasingly long hours that were required from each worker, and of the decreasing salaries.

I was surprised to learn that when it became too expensive to pay local workers, the factory owners turned to immigrants to fill those jobs. At the turn of the 20th century, millions of desperately poor immigrants flooded into the United States. Legally. All were welcomed, because they were hungry enough to provide the endless hours of working hands that the new factories required.

Our class looked at photos of those immigrants working in our new industries. I saw these. 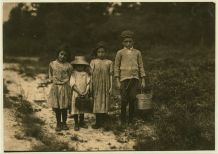 And I thought about how I would feel if my children were forced to work as these little ones were, just so that our family could survive.

I was shocked. I was brought to tears. This could have been my child. My Italian child. Instead of snuggling in my arms and reading books, or going to kindergarten to learn how to share, my child could have been in this field.

When I learned all of this, when I found out what had happened in my country just around the time that my family arrived from Italy, I was overwhelmed with anger and sorrow.

Luckily for me, our class went on to study the labor movement. We read “Bread and Roses” and “Triangle“. We learned about corporate greed and about desperate workers. We read letters and news reports and books and stories.

We learned about the people who stood up for their basic human rights.

We were taught the story of the American Labor Movement. And I was able to shake off my grief and embrace the power of united workers, united and supportive average Americans.

The professor taught us about the first Labor Day, and the significance of it’s recognition.

I no longer feel frustrated when teachers demand a quiet place to work and plan. I no longer think that unions are simply self-serving.

Now I know that in the absence of workers’ unions, we would not have a forty hour work week, or mandated weekends. We wouldn’t have sick time, or vacations, or health insurance.

We would have no child labor laws. Can you even imagine?

Now I know that on Labor Day, we need to look at the tender faces of those little children working endless hours in terrible places. I know that we need to pull up the images of five and six year olds facing a life of physical labor, with no hope of education or betterment or a happy and healthy future.

I hope that on this Labor Day you will enjoy your cheeseburgers and your families and your ice cold beers. But I also hope that you’ll take a minute to think about the 146 young workers who died in the Triangle Fire. I hope that you’ll spare a thought for the thousands of little children who labored in our textile factories and our fish canneries and our berry farms.

I hope that you will raise a glass to the Union movement and that you will give a silent salute to those workers who fought and suffered and sacrificed so that we could have a weekend like this one.