You really can. Dogs can be such fabulous mentors. Such great teachers.

I’ve learned a lot from my dogs over the years. For example, I’ve learned that it doesn’t matter how much your aging hips hurt, you should still run through the woods when you get a chance. I’ve learned to age with grace and humor, and to keep my mind in the present moment, rather than wondering about the future or obsessing about the past.

But I’ve learned a whole bunch of new things in the past 5 days. I’ve learned these lessons by watching my new doggie, Bentley, as he integrates himself into our household.

I’ll give you the general description of the situation here, and I bet you’ll see those lessons, too.

We have to start with our boy Lennie, also fondly known as “Devil Dog.”  He is a jumper on guests, a licker of faces, a yipping, barking whirlwind of joyful dogginess. He has learned our household rules in the almost two years that we’ve had him.

He’s adorable. We love him!

Lennie does well with the grandchildren. He is loud and feisty, but he’s gentle, too. They get along very well, which brings us nothing but joy.

But recently we felt sad for Lennie. Our older dog has been gone for a year, and Lennie seemed to be in need of a canine buddy.

So we decided to adopt the world’s cutest, goofiest little boy, Bentley Bass. Bentley is a basset hound/lab/pointer? mix. He’s short, sassy, shiny black and so full of love that it practically oozes out of his velvety ears.

Bentley took about 3 minutes to get to know Lennie. It took him one transit of our house to learn where the goodies are.

It took him one nanosecond to recognize the grandkids as his best source of snacks/toys/hugs.

“I bet she drops snacks.”

But here are my observations of how my two sweet dogs differ, and what that means for them.

I have two young dogs who want the best doggie toys. One of them barks every 2 seconds, shows his hackles and his teeth, threatens death and destruction over the blue nylabone.  The other stays quiet, sits back for a minute and waits until the barker is in full throttle.

Then he gently grabs the nylabone and brings it onto the couch to chew.

The same is true with food. Lennie barks, yips, backs up and shakes his head when I put down the two matching bowls of kibble. You can practically hear his thoughts, “You just better keep your pointy nose in your own dish, buddy! Don’t even think about eating mine!”

And as he does, Bentley stands quietly at his own dish, eating his meal without any stress. He’s usually all finished and happily back on the couch (with the nylabone) before Loud Lennie has taken a bite.

Bentley growls and fake bites with Lennie as they play. He is brave, solid, unshakable as his bigger brother rolls him over. He grins, nips, pulls on Lennie’s ears and makes sure that everyone knows he’s just having fun.

When the kids are eating breakfast or lunch, and Lennie whines and begs for a bite, Bentley calmly and quietly inches his way forward into the room. If I tell him to leave, he does. But when I look away, he silently moseys back in and gets a few bites from Ellie and Johnny. If I reprimand him, he lowers his sleek head and gazes up at me with his gentle eyes.

When the two dogs come onto the bed to sleep, Lennie prances around, turns in circles, yips a few times and makes it generally known that he is the man in charge. He’ll take the best spot, thank you very much.

But of course, while he’s posturing, Bentley lays himself down beside me with his head on my pillow. He hasn’t said a word, but he’s taken the prize.

This goes on all day.  I hear Lennie yelping, arguing, barking and when I come to see what’s going on, there’s my Bentley, chewing on one dog toy while calmly lying on top of three more.

Bentley does not shoot off his mouth, although I have heard him bark twice in five days. He doesn’t posture or make a big deal of things. Bentley stays calm, stays friendly, and quietly gets himself what he needs.

Don’t you wish he could run for President?? 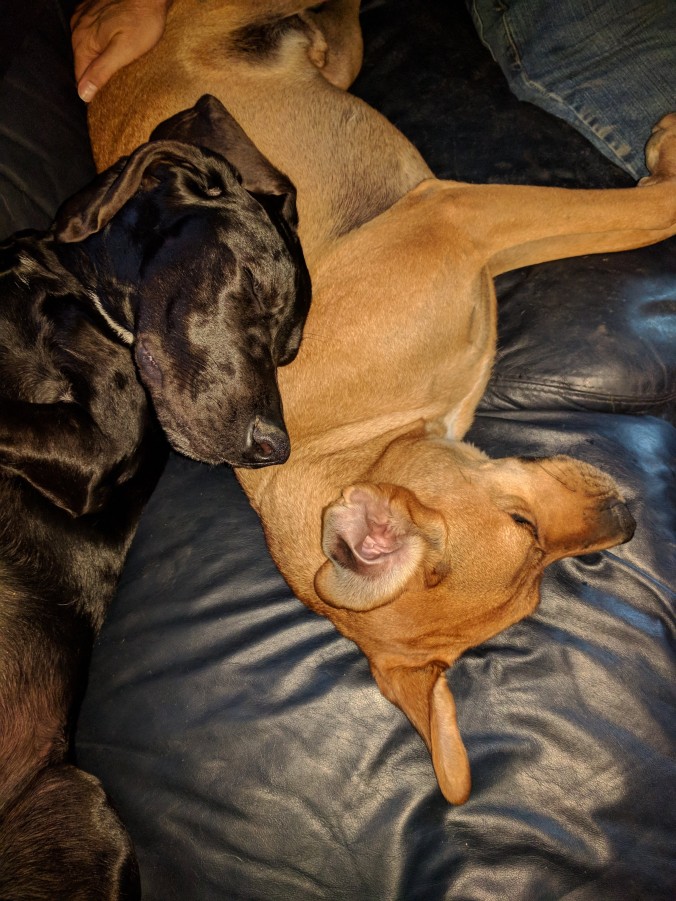 I tell you, dogs are like Lays potato chips. No one can have just one.

In the past two years, we have found ourselves navigating the tender steps between owning two old dogs to owning one young pup.

As we let our sweet old friends cross that rainbow bridge, we pushed ourselves to welcome a new, young puppy into the house.

This was a very smart move. Even as we grieved the loss of our slow, sedate, cranky old friends, we found ourselves viewing the world through the eyes of our happy, energetic, joyful puppy. 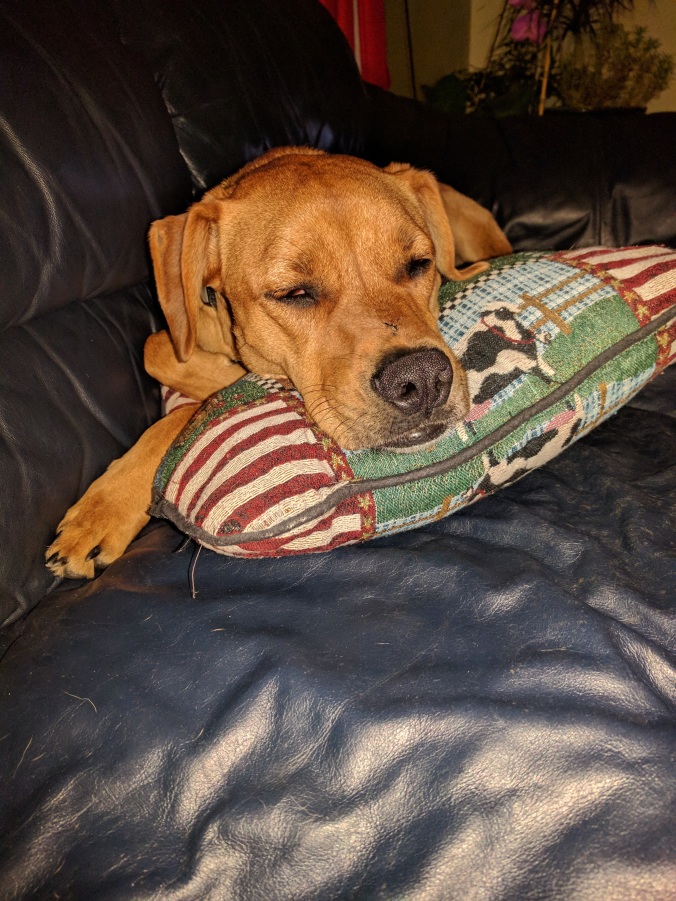 But now we are the aging parents of one young doggie. He adores us, and its mutual. We (as in, my husband) walk him every day. He plays with our grandkids, and takes rides in the car and sometimes gets to play with our next door doggies.

He sleeps with us most night, resting his chin on my chest or on my husband’s hip. He follows us around with his adoring brown eyes. He kisses the grandchildren every day when they come in. He plays with us.

Until our daughter and her family go away for a few days, leaving their two dogs with us. That’s when we get to see how overjoyed our boy, Lennie, is when he has playmates of his own. Izzy is an older lady, somewhat aloof and somewhat removed from the raucousness of the kids. When things get out of hand, Izzy barks and snarls and makes the kids behave.

I consider her my ally.

Nino is a funny little guy, with some significant special needs. He has dwarfism, so he can’t run as far or as long as he’d like. His head, his big old bullet pit bull head, is bigger than the rest of his body. He is awkward at best.

And he is affectionate, energetic, loving and full of beans.

He and Lennie jump on each other, bite each others’ necks and roll over each other for hours.

You can feel the happiness pouring off of both of them as they do. 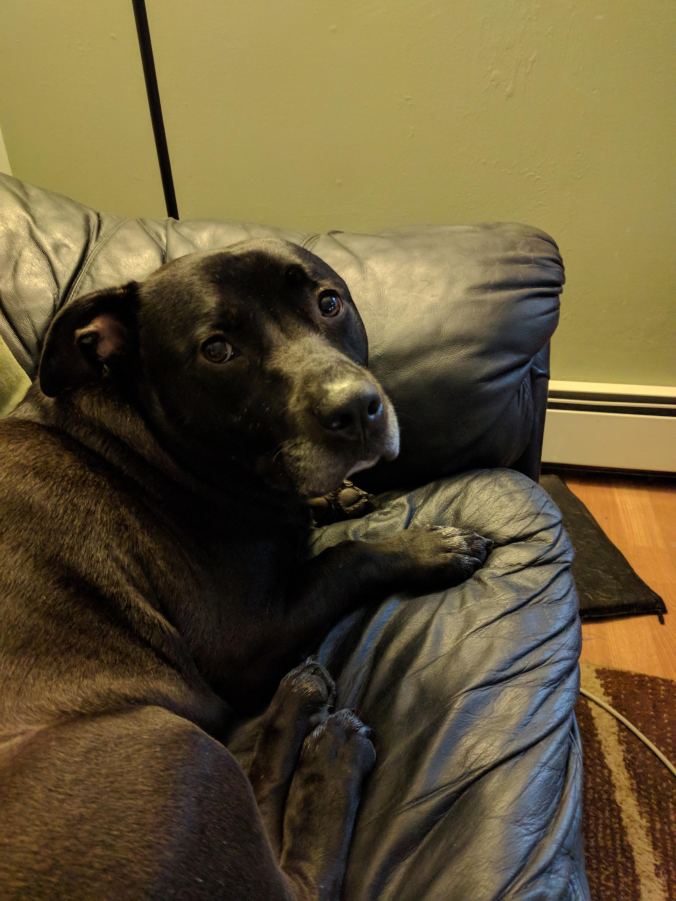 Don’t you love my giant head?

Kate and Sam are unlikely to turn over their two pups to us, so we need to start shopping. Lennie loves us a lot, but he obviously needs a buddy to boss around.

Just like Lays chips. You can’t get away with only one.

Anyone have a sweet youngish dog to give away??? H’mmm?